It has been proved by researchers that Uganda is one of the most visited countries in Africa by tourists. A few years ago, the ‘pearl of Africa’ was voted as the number one destination in the world by Lonely Planet, a travel guide book publisher.

Among the tourists that visit Uganda, over 60% come specifically for Mountain Gorilla trekking as the main reason. Mountain Gorillas Safaris in Uganda can be done in only two parks, Bwindi Impenetrable forest is home to more than half of the World’s remaining population of these shy gigantic but peaceful primates and the other is Mgahinga National park that is part of the Virunga massif.
mgahinga forest views

Views of Mgahinga Forest National Park
Though the park has fewer numbers of mountain gorillas, it has more to offer to tourists that has a unique taste for rare species of primates. It is the only park in Uganda with Golden monkeys that are only limited to the Virunga region in the world shared by Rwanda and the Democratic Republic of Congo.

Today, we bring you how best you can enjoy the best of your time in Mgahinga national park during your safari to Uganda.

There is no way you can list Bwindi Impenetrable National Park on the list of top National Parks which have exposed Uganda Worldwide as far as Tourism is concerned and leave out Mgahinga Gorilla National Park. They both represent Uganda in the five only Gorilla hosting destinations in the World.

Additionally, Mgahinga Gorilla National Park is one of the three great National Parks which make up the Virunga Massif.

Nature of the Park
The park is characterized by thick tropical rain forests, Savannah, Grasslands, bogs, shrubs, bamboo forested areas and swampy areas which provide habitat to a wide range of species
How to get there

Entebbe to Kisoro Route:
Usually, Visitors to Mgahinga in Southwestern Uganda access it by road transport means, similarly travelling from Kampala to Mgahinga National Park via Kampala- Masaka- Mbarara highway is the best route of recommendation.

En route your journey, a stopover at the equator is included for some brief explanation about the equator, photos when posing at the equator and snacks, then after all that session, the journey is continued not until you reach Mbarara town for another stopover such that you can have lunch.

After lunch in Mbarara, you continue with the Journey up to Mgahinga Gorilla National Park for check-in at the lodge.

It usually takes about 8-9 hours for the drive from Kampala up to Mgahinga Gorilla National Park but mostly depending on speed used, traffic along the way, nature of the roads and en-route stopovers included.

There is a lot to do in this tropical forest of Mgahinga besides mere hiking and nature walks to make your trip memorable including;

Mountain Gorillas
Gorilla trekking in Mgahinga is usually started in the morning after a briefing which is conducted at the Park offices or starting point to highlight trekkers on what to do and what not to do while in the Jungle and in presence of Mountain Gorillas. 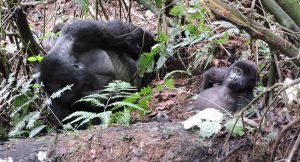 After briefing the journey to the Jungle is started in a group of eight people plus a park ranger guide and armed officers heading to the Jungle in search of these apes for interaction.

After locating these apes in the Jungle, you are only allowed to be in their presence for only one hour while experiencing their real behaviours like seeing them laughing, feeding, playing plus taking photos and videos of them.

After one hour you are required to leave the place back to the starting point or Park offices for the Gorilla trekking certificate. It is advised that you come along with packed food from your hotel of residence for eating while in the Jungle. The reason for this advice is that most of the times lunch reach when trekkers are still in the Jungle being unable to come back for Lunch.

Gorilla trekking in Mgahinga requires a permit that costs $600 USD per person. This must be booked in advance before your trekking dates and only issued by Uganda Wildlife Authority. It is usually booked through a local tour operator.

Golden Monkey tracking
This is another exciting adventure to take while in Mgahinga Gorilla National Park, it usually involves moving in a group of about thirty people or more following the permanently established routes heading into the Jungle in search of these species of the Old World monkey family for interaction, behaviour experience and more.
Golden Monkey trekking

Golden Monkey
It’s advised that when moving in the Jungle, you should move slowly and keep voices at a low tone to avoid scaring these primates which may force them to move very far deep into the forest trying to hideaway.

Golden Monkey primates are mostly found in Mountainous bamboo forested areas, so it’s advised for all participators to be physically fit for the activity. This adventure activity in Mgahinga Gorilla National Park requires a permit and this Permit costs $50 USD per person.