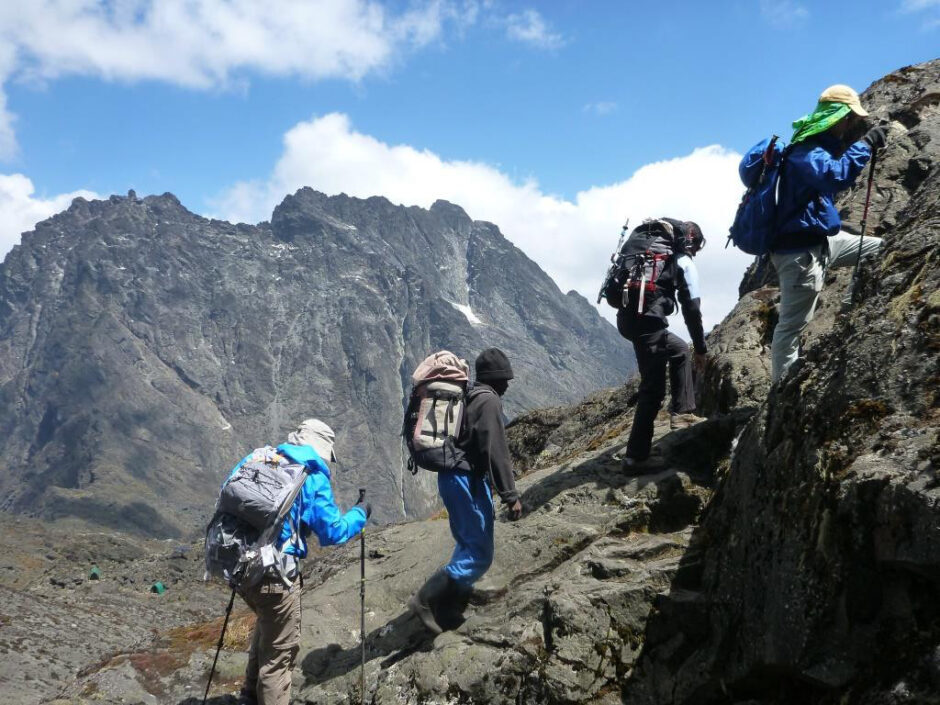 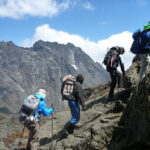 If you are an adventure enthusiast, the Rwenzori Mountains are incomparably one of Africa’s most stunning and exceptional natural wonders for you to realize life-changing adventures. Also referred to as the “Mountains of the Moon/Ruwenzori Range,” the Rwenzori Mountains feature among unexploited adventure sites in Uganda. They are situated in Southwestern-Kabarole, Bundibugyo, and Kasese districts, Uganda along the Uganda-Congo border. The Mountains of the Moon feature among the tallest mountain ranges in Africa and highest mountains in Uganda even higher than the Alps and they are ice-capped. Over 6 massifs are found within the Rwenzori Mountains;-Mount Stanley with Margherita peak being one of its twin summits and also Africa’s 3rd highest peak that stands at 5109 meters. Africa’s 4th and 5th highest peaks which Mount Baker (4843 meters) and Mount Speke (4890 meters); Mount Emin at 4798 meters, Mount Gessi at 4715 meters, and Mount Luigi Di Savio at 4627 meters make up the Mountains of the Moons. Hiking through these mountains is such an unforgettable experience that you should participate in while on a safari in Uganda.

These mountains stand within the Rwenzori Mountains National Park in Uganda-a UNESCO World Heritage Site that was established in 1991 and got its heritage status in 1994 due to its extraordinary natural wonders. They offer the most challenging adventures but the most exceptional and repaying environment. Besides the remarkable mountain ranges, there are also Lakes, glaciers, untouched plants as well as numerous wildlife species-the most spectacular features for you to encounter while on a hiking tour in the Rwenzori Mountains.

Over 70 mammals, 217 avian species, 19 Albertine Rift Endemics as well as unusual vegetation species are all confined within and around these magnificent mountain ranges. Hiking Uganda safaris in the Rwenzori Mountains, therefore, incorporates wildlife and birding. The biodiversity for you to encounter while on mountaineering adventure includes the colobus and Blue monkeys, elephants, Giant forest hog, the Yellow forest hog, Chimpanzees, and the Yellow-backed duiker. The birds to look out while hiking includes the Rwenzori Turaco, the long-eared owl, the Handsome francolin, Several barbet species, Archer’s ground robin, the Cinnamon chested bee-eater, the varied sunbird species, the white starred forest robin, greenbul, the Black Eagle, the Lammergeyer, scarlet tufted malachite sunbird and flycatcher.

Unlike the higher peaks of Mount Kenya and Mount Kilimanjaro, the Mountains of the Moon are the fault-block mountain range that came into existence due to rifting in East Africa for about 10 million years. For unforgettable mountaineering adventures, you need about 9 to 12 days to hike but you should be physically fit with a bit of skill to hike.

This block mountain is credited for its vegetation that ranges from tropical through alpine meadows to snow. The mountain ranges support its own species and several of Giant together with a six meters tall heather covered in moss which is found on one of its stunning peaks. The Rwenzori Mountains have 5 overlapping vegetation zones of the evergreen forest zone at 2800 meters, the Bamboo at 2800 to 3300 meters, the heather 3000 to 3800 meters, the alpine zone from 3500 to 4500 meters, and finally the nival zone from 4400 to 5000 meters. As you hike up, you find some of the unique plant species like lobelia and groundsels. The vegetation in the Mountains of the moon is distinct to equatorial alpine Africa.

Booking for mountaineering adventures in the Rwenzori Mountains

All climbing arrangements must be done through a local tour operator or Rwenzori Mountaineering Services (RMS), directly through their offices in Kasese or Uganda Wildlife Authority (UWA) in Kampala,

How to get to the Rwenzori Mountains
The Mountains of the Moon are found within the Rwenzori National Park and the Nyakalengija trailhead is accessible about 22 kilometers from Kasese. If you are in Kampala, there are 2 main routes to the mountain; a Northern route via the stunning Fort Portal town to Ibanda and a Southern route through Kasese which crosses the equator twice. If you are in DR Congo, you can also reach the mountain to the west or even fly into Kigali-Rwanda and then board the bus to Gisenyi passed the Congo where you will proceed to Beni. At this point, if you proceed towards Kasindi then to Beni, you will cross within 13 kilometers of Mutwanga.

Tips on Mount Rwenzori hiking
To stay safe while on mountain climbing, you will need appropriate gear like hiking boots but they should be light, a waterproof jacket,s, and waterproof trousers. You need adequate preparation and cautious attention to safety to allow you to have the most exceptional high elevation mountain hiking and adventure. You can curb down the issues about elevation sicknesses by familiarizing yourself with great highness.

You also need to be ready for the breathtaking hike with your hiking climbing clothes prior to exploring the mountains. Cold and wet conditions are common on these mountains and this requires you to have some warm clothes for cold nights.

Don’t go for mountain climbing when you are not fit or when you have headaches or other signs of sickness, then you need to go downhill about 3000 feet for medication attention. Also, you may need acetazolamide to help you climb as it boosts your breathing and inhaling of oxygen. The accommodation at a higher altitude can be challenging due to low oxygen intake at night.

The wet season in the area starts from April to Mid June and October to early December; however, this doesn’t stop it from raining even during the dry season. Therefore you need rain jackets for this kind of weather.

The paths are at times muddy and slippery after it has rained especially around Lake Bujuku, Bigo Bogs, and even some of the trails between Kitandara and Guy Yeoman huts.

Most of the climbing equipment you require during your hiking safaris can be hired from the Ruwenzori Mountaineering Services and they include the maps and guides.

When to go for mountaineering in the Rwenzori Mountains

The Rwenzori Mountains are characterized by heavy rainfalls that make the area a bit challenging when it comes to hiking safaris. The dry spell is therefore the best for you to hike on Mount Rwenzori. This season starts from the months of June to August and December to February but during this period, you will expect some rain showers while on a hiking tour to the Rwenzori Mountains.

Accommodation around the Rwenzori Mountains

Camping
There are several huts that have been established through the major circuit of the Rwenzori. They comprise Nyabitaba hut at 2650 meters, the Bujuku hut at 3977 meters, John Matte hut at 3380 meters, Elena hut on Mount Stanley 4540 meters, the Kitandara Lake Hut at 4027 meters and the Guy Yeoman Hut around the Mubuku River Valley at 3260 meters. On the western part, there are 5 huts which include the Kyandolere hut at 1700 meters, Kalongi at 2140 meters, Mahungu at 3310 meters, and Kyondo Hut at 4303m, and the Moraine Hut at 4500m.

The Ruboni Community Campground; situated at the main gate of Mountains of the Moon in Western Uganda. Camping around this area offers you the opportunity to view the Margarita peak without paying park entrance fees.

In conclusion, the mountain climbing adventures in the Rwenzori Mountains are waiting for you to come and realize the most exceptional and unforgettable experiences. A trek to the Rwenzori Mountains is strenuous but rewards you with several biodiversities including primates, birds, plant species as well as the most stunning sceneries in and around the Rwenzori National Park and its surrounding. You need to be physically well if you are to partake in this lifetime adventure in Uganda.