Location: Bushenyi district is located in Western Uganda. It borders districts Mbarara to the East, Ntungamo and
Rukungiri to the South, Kasese to the North, and the Democratic Republic of Congo to the West.

Population: The district has a population of about 845,900 people.

Main Town : Bushenyi is the main town of Bushenyi district and has a
the population of about 14,200 people.

Land and vegetation : 8.6 percent of the district area is open water, 2.2 percent
is wetland and 18.3 percent is forest.

About 50 percent of Queen Elizabeth National Park lies in the Bushenyi District. The key tourist areas of the Park found in the district include the Ishasha sector, Kyambura Gorge, and parts of Lake Edward and the Kazinga Channel.

The Ishasha sector is popularly known for game viewing of tree climbing lions. The Kazinga channel connects Lakes Edward and George and is popular for boat rides.

2. Kalinzu Forest Reserve/Ecotourism center
The center serves as a campsite and excursion attraction. Accommodation includes Bandas. The particular attractions available include a forest/nature/community walk and a waterfall.

3. Bunyaruguru Crater Lakes
The Lakes, which are two in number, are found about 50 kilometers from Bushenyi town, off the Bushenyi-Kasese highway, in Bunyaruguru county. The lakes are sky-blue with water surfaces found at about a kilometer below the grounds and settlements. Besides hill hiking and nature walks, the area is also a popular spot for mountain biking.

Other animals found in the Reserve are similar to those found in Queen Elizabeth National Park and include elephants, buffalos, Kobs, and lions. 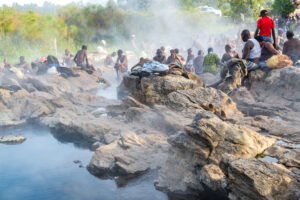 Kitagata Hot Springs is located 15 kilometers south of Bushenyi town. The hot springs, which cover an area of about 50 square meters, are locally believed to treat the sick and hot baths by local health pilgrims are a common sight.

The site at the springs requires the development of infrastructure to become of national significance.

6. Crafts and Souvenirs Industry
The crafts and souvenir industry has not developed to tap the potential market from the growing number of stop-over visitors. There was not any crafts/souvenirs shop both at Bushenyi and the second-largest vibrant junction town of Ishasha.

7. Hotel and Catering
The district had a total of 25 accommodation establishments and a capacity of 496 beds, at the time of the survey. Jacana Safari Lodge located at a crater lake in the Imaramagambo forest, just outside the Queen Elizabeth National Park, was most outstanding. The luxury lodge had eight cottages and eight beds catering for upper-class holiday visitors.