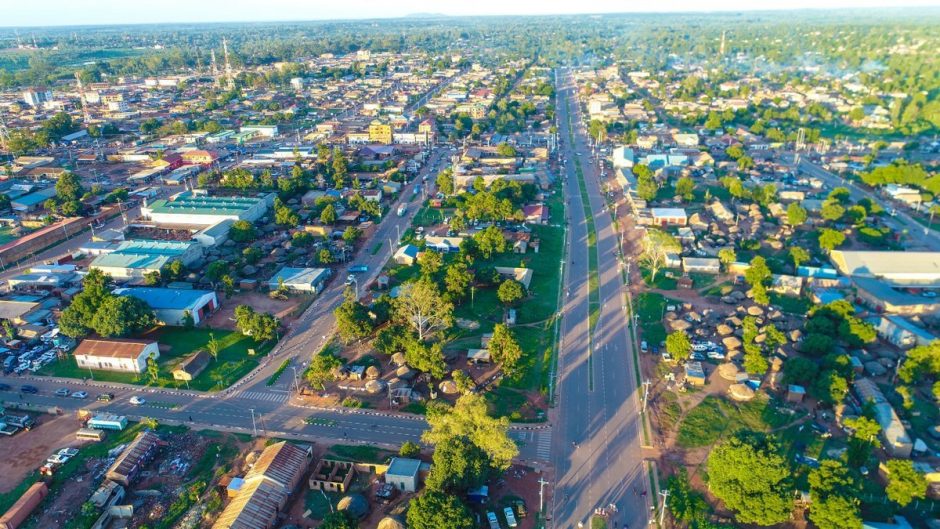 Population : The District has a population of about 468,500 people.

Main Town : Gulu is the main town of the district and has a population
of 113,200 people. The town is the largest town in northern Uganda, with reasonable basic infrastructure dating back to the colonial and early post-colonial period when it served as the regional centre for northern Uganda.

Most of the Gulu district has relatively flat terrain covered by thick savannah grassland vegetation and 2.5 per cent of the district area comprises central and local forest reserves. The terrain is characterised by forested valleys found along rivers flowing from the district interior highlands toward the Victoria Nile, the Albert Nile and the Achwa rivers. The rivers from the highlands include River Tochi, River Unyama, River Ayugi, River Ayago, River Apar, River Eruzi and River Aswa. The forests include Opaka, Abera and Kaladima.

The terrain, rivers and vegetation of the district create a conducive habitat for a variety of wildlife and a significant part of the Murchison Falls National Park lies in the Gulu district.

The key tourist attractions of the district are given below.

The park’s attractions include game drives, bird watching and the scenic boat rides. In particular, the park offers game viewing of indigenous wildlife including African forest elephants, lions, giraffes, African buffalos, bushbucks, kobs, crocodiles, waterbucks, kongonis, oribis, bohor reedbucks, baboons, warthogs and a variety of monkey species. Murchison falls is also one of the most important attractions in the park.

The Fort is located 30 kilometres from Gulu town in Ajulu parish, Patiko sub-county, Aswa County. Constructed as a slave collection centre, the Fort was taken over by Sir Samuel Baker from 1872 to 1888, before it became headquarters for Emin Pasha and Gordon, the respective Governors of the then Equatorial Province of the British Protectorate.

The exploitation of the Fort for tourism purposes was disrupted by the insurgency in northern Uganda. The previously existing infrastructure was destroyed. The layout of the Fortis as follows:
– Guides Office
– Communication Trench
– Entrance Gate
– Millet Store
– Simsim Store
– Court Yard
– Marks of executions by axe
– Chair of Judge (seat curved out of high rock)
– Cell for women captives
– Cell for men captives
– Execution area
– Area for depositing bodies (skulls exist at rock bottom)
– Firing squad area
– Mark of cross left by Baker’s wife where she used to pray from every morning
– Armery store
– Observatory point
– Baber’s slip (breathtaking deep gap in the rock where Baker used to hope repeatedly every morning)
– Grinding stone
– Oyaro’s passage (the point at the deep communication trench named after a slave who managed to escape by jumping over the trench).
– Guest reception centre
– Two huts depicting Acholi traditional huts.

3. Amoro Hot spring
The Hot spring is located about 35 kilometres from Gulu town, in Paga parish, Amoro sub-county, Kilak county. The hot spring covers an area of about 100 square metres and is the largest found in northern Uganda. Although undeveloped, the hot spring has a lot of potential for tourism exploitation. The surrounding landscape is suitable for developing campsites and excursion grounds.

4. Karuma Falls
The western part of Karuma falls is located in the Gulu district and the eastern part in Apac while the southern part is in Masindi. The designs of the proposed underground electricity dam to be built there indicate minimal disruption with the visible nature of the falls. Thus the falls which already have tourist campsites on the southern bank in Masindi district have large potential for tourism exploitation.

5. Tochi Resort Beach
Located about 20 kilometres south of Gulu town, Tochi beach is a low lying sandy bank of River Tochi. The beach has the potential for development into an important tourist attraction for excursions, camping and bandas.

6. Guruguru caves
The caves are located about 25 kilometres north of Gulu town. They are said to have been used as safe haven during the Lamogi rebellion and historical inter-clan wars among the Luo. The Guruguru caves offer opportunities for further diversification of tourism products when developed.

7. Hill Climbing
There are a number of isolated hills in the district that offer opportunities for hill climbing. These are: Kilak, Ato, Patiko and Moro hills.

8. Atiak Colobus Monkeys
A large concentration of colobus monkeys exists in the Atiak forest reserve near the Albert Nile. The fairly rare mammals, a wide variety of bird species and the savannah short forest canopies combine to give a potential attraction that may be enhanced by tourist trails and camp/excursion sites to offer a perfect product.

9. Cultural Performances and Antiquities
The Acholi dance and antiquities have not yet been fully developed to tap the potential benefits from tourism. There are plans by the local authorities to establish a cultural centre in Gulu town for crafts, souvenirs and cultural ornaments and regalia.