Location : Located in eastern Uganda bordering Kenya to the East; and the Districts of Mbale to the West and South and Moroto to the North.

Main Town: Kapchorwa is the main town and has a population
of about 9,000 people.

Area: 1731.7 Square Kilometres
Land and Vegetation: The District has a limited area of open water bodies
and 1.2 per cent is a wetland. A significant part of the district area is covered by the Mount Elgon ranges. The lower areas comprise settlements and secondary vegetation, while thick low lying canopy forests cover the mid-height areas of the Elgon. Found at the higher altitudes are the unique temperate montane vegetation of heath and moorland, characteristic of the Elgon Mountain peaks.

The key currently exploited and potential attractions are given below;

1. Mount Elgon National Park
Mount Elgon National Park is found in both Uganda and Kenya. In Uganda, it is found in the districts of Kapchorwa and Mbale. The National Park is a gazetted international ecological conservation area, as a habitat for unique vegetation species. The Park is also home to a number of endangered animal species, including buffalos and cheaters which traverse the Mount Elgon ranges on both Uganda and Kenya sides. In addition, the Park is also a habitat for bird species not found in other parts of Uganda. Thus the Park offers opportunities for mountain climbing, game and flora viewing.

Better accessibility is offered via Kapkwata and the ‘forest exploration centre’ at Bumasola in Kapchorwa District, where mountain climbing expedition trails are well developed.

Besides the wildlife, the Caldera found at the most top of the Elgon ranges is a key attraction of the Park. The Caldera remained as a depression on top of Mount Elgon after the volcanic activity. The depression is 8 kilometres in diameter and has a circumference of 40 Kilometres. Other attractions within the Caldera include Hot Springs, Crater lakes, the Swam Gorge with a heavy population of wild game and scenic peaks rising up to 4321 Kilometres above sea level. 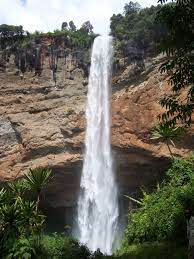 The falls are found at Sippi, about 15 kilometres from Kapchorwa town, along the Mbale-Kapchorwa road.
The falls are a key attraction for visitors to the district and of national significance. The site comprises four falls and the walk to the bottom of the falls is the main attraction. Cave exploration and community/nature walk are part of the product offered at Sippi.

3. Exploration Centre
The Exploration centre is another important attraction for visitors to Kapchorwa. The centre is a facility designed for training local communities and visitors on ecological aspects and sustainable use of the Park’s resources. Some trails have been developed from the centre to important ecological and tourism points along with the mountain ranges.
The Centre also offers ample accommodation for visitors to the Park.

4. Pian Upe Game Reserve
The Reserve is found in the Nakapipirit district at the northern boundary of Kapchorwa district. The Reserve is a habitat to significant numbers of game species due to the various rivers and green river valleys. The animals include buffalos, hynas, Dik-Dik, the Greater and Lesser Kudus. Others are: Topis, Zebras, Orex, Jackson Here Beasts, Oribi and Ostriches. Occasionally, Kenyan Zebras also wander from Kenya through the Pian-Upe Reserve.

There were plans by local operators/guides in Kapchorwa to resume game drives to the Reserve.

5. Community Activities
Community large scale growing of wheat and maize, and subsistence growing of bananas and other crops are important community activities.

6. Crafts and Souvenirs Industry
There were no independent crafts and souvenirs shops in the District at the time of the survey.

However, the sale of crafts and souvenirs has potential in the District based on the significant amount of tourist traffic.

7. Hotel and Catering Industry
The district had 16 accommodation business establishments with a capacity of 275 beds, at the time of the survey. The industry employed 99 people in the district.

Sippi Falls Rest Camp was the most outstanding accommodation establishment in the district catering for middle and upper-class tourists.