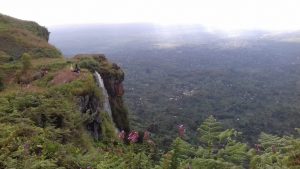 Location: Located in Eastern Uganda bordering Kenya to the
East; and the Districts of Pallisa and Kumi to the
West, Kapchorwa and Moroto to the North and Tororo to the South.

Main Town:Mbale is the main town with a population of about 54,000.

Area : 2,466.7 Km2
Land and Vegetation : The District area has no significant open water
bodies, while 2.3 per cent is a wetland. The landscape is mainly hilly, comprising parts of the Mount Elgon ranges. Secondary forest and thick scrub cover the lower areas of Mount Elgon ranges, while thick forests cover the mid-height areas, which dwindle into unique temperate montane vegetation of heath and moorland at higher altitudes.

The key currently exploited and potential attractions are given below.

Mount Elgon National Park
Mount Elgon National Park is found in both Uganda and Kenya. In Uganda, it is found in the districts of Kapchorwa and Mbale. The National Park is a gazetted international ecological conservation area, as a habitat for unique vegetation species. The Park is also home to a number of endangered animal species, including buffalos and cheaters which traverse the Mount Elgon ranges on both Uganda and Kenya sides. In addition, the Park is also a habitat for bird species not found in other parts of Uganda. Established only in 1993, the Park’s tourism potential is yet to be fully harnessed. In particular, mountain climbing expedition trails are not well developed on the Mbale District side. Better accessibility is offered via Kapkwata and the ‘forest exploration centre’ at Bumasola in Kapchorwa District. Besides the wildlife, the Caldera found at the most top of the Elgon ranges is a key attraction of the Park. The Caldera remained as a depression on top of Mount Elgon after the volcanic activity. The depression is 8 kilometres in diameter and has a circumference of 40 Kilometres. Other attractions within the Caldera include Hot Springs, Crater lakes, the Swam Gorge with a heavy population of wild game and scenic peaks rising up to 4321 Kilometres above sea level.

Simu and Sisi Falls
Simu and Sisi falls are both found in Sironko County, in Mbale District. The falls run from the top of Mount Elgon down to the low lands. In particular, Simu falls are bigger and are 50 metres in height and 7 metres in width. The falls are yet to be developed for tourism. Access to the sites is by walking through small trails to the sites. Sisi falls site lies in an area surrounded by cultivated lands.

The primates found include blue-tailed and black and white monkeys. The shy African Civet mammals are also a common feature. Viewing birds such as the Turakos is a common experience.

Both sites are important for Scenery and Cliff/Ridge viewing and birding. Some campsites exist at the sites and UWA are reportedly developing trails from the areas to the Caldera.

Bulukyeke – Bukigai Hills
The hills are found south of the Elgon ranges. A historical campsite dating to the colonial period exists at the bottom of the hills. Infrastructure at the site includes a permanent tile-roofed shelter and toilet facilities. The campsite has beautiful scenery of the Elgon ranges and was used as a launching point for mountain climbing expeditions. However, encroachment on the mountain slopes by human settlements has made the area prone to landslides.

Semei Kakungulu Tombs are located about 5 Kilometres off the Mbale-Soroti road while the Mutoto Circumcision site is located within Mbale Municipality.

The Tombs are the former representative of the colonial government in charge of Eastern Uganda. The Mutoto site is a place where the annual tribal circumcision ceremony is launched.

8.Crafts and Souvenirs Industry
There were no independent crafts and souvenirs shops in the District at the time of the survey.

However, the sale of crafts and souvenirs has potential in the District based on the significant tourist traffic and availability of natural vegetation resources for the industry.

9.Hotel and Catering Industry
The district had 41 accommodation business establishments with a capacity of 790 beds, at the time of the survey. The industry employed 403 people in the district.

The district had a significant number of outstanding accommodation establishments catering for a wide range of visitors, including upper-class tourists. These are: Mbale Resort Hotel, Mount Elgon Hotel, West End Inn and Sunrise Inn

The bamboo shoot meal (Malewa), which is unique to Mbale, is considered an additional attraction particularly for the Elgon climbers.