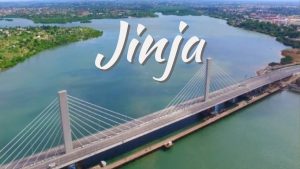 Location: Jinja District is located at the confluence of Lake Victoria
and the source of River Nile bordering the Districts of Mukono and Kayunga to the west, Mayuge and Iganga to the East, and Kamuli to the north.

Population : The District has a population of about 392,000 people.

Main town : Jinja town is the largest town of the district and the second
most important capital city of Uganda. The town was the industrial heart of the country in the 1960s and 1970s.

The key tourist attractions of the district are given below.

1. Source of the Nile
The Source of the Nile, the second-longest river in the world, marketed as a discovery of one of the first European explorers, namely Speke, is an internationally unique attraction. Commissioning a study to improve it as a tourist attraction and implementing the recommendations would greatly help to enhance its potential as a tourist attraction for both international tourists and domestic excursionists.

2. Bujagali Falls
These are located along the Nile River, within a distance of about 10 kilometers from Jinja municipality. The scenery and rafting activities of Bujagali Falls currently exploited on a small scale have an enormous potential for both excursions and international tourism. The falls also offer opportunities for bird watching.

4. Kyabirwa Falls
Located 8 kilometers from Jinja, the falls offer a good scenery and landscape for campsites that are not yet fully exploited. Potential also exists for bird watching and Ethnobotany.

5. Lake Victoria Beaches
The lake’s beaches have been partially exploited for the location of tourism developments, especially hotels. These beaches include the sites at Sailing Club, Tilapia Club, and Masese. Besides the scenery, the lake can be exploited for water sports, which would attract domestic, foreign residents, and foreign non-resident tourists.

6. Islands in Lake Victoria
These include Samuka, Ndaiga, LwabitookeI, and LwabitookeII. Apart from Samuka, the rest of the Islands have not been exploited for tourism purposes despite the existing potential. The existing potential includes boat racing, sport fishing, overnight camping, day excursions, and various water sports.

Agro-based industries such as sugar and tea processing establishments have the potential to attract foreign resident and non-resident tourists, if included in the tour packages, for tourists coming from countries where the semi-finished or finished products are exported.

The hydroelectricity plant at Jinja Owen Falls is also an attraction, especially for school tours and other domestic excursion groups.

7. Agriculture
The tea and sugar estates are currently exploited as tourist attractions. Like the agro-based industries, the plantations have tourism potential as an attraction for tourists coming from countries where semi-finished or finished products of sugar and tea are exported.

10. Antiquities / Historical sites
A number of historical sites exist in the Jinja district. These are: Bujagali ancestral site, for Soga tribe ancestral spirits, at Bujagali falls; the current Busoga King’s palace at Nakabango; Mpumudde hill, the historical meeting place of the Busoga chiefs and the
British colonial Governors. Mpumudde is also the place where King Kabalega, of the Bunyoro Kingdom, died.

11. Crafts
Crafts shops, workshops, and community groups are common in Jinja town and its suburbs, making mats, baskets, and other souvenirs from papyrus and other natural materials.

The souvenir industry has a large potential in the Jinja district if programs for sustainable use of the raw materials are developed.

12. Hotel and Catering
The hotel and catering sector is fairly well developed in the Jinja district. The existing accommodation establishments range from backpacker to upper-class tourist ones.

However, there is a need for on-job training of service providers, particularly in the catering sector, in order to ensure minimum catering service standards.

It is also necessary to invite more investors in the hotel sector to cope with the ever-increasing visitor numbers while avoiding counterproductive high accommodation rates.