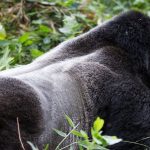 Mgahinga National Park is one of the four national parks that are home to the endangered mountain gorillas in Uganda. Located in South Western Uganda, the park is famous for gorilla safaris, which attracts most of its tourists. Nyakagezi is the only gorilla family that has been habituated for tourists visits and today let’s look at the fascinating members of the gorilla family.

MARK AND MAFIA GORILLAS
The two gorillas: Mark and Mafia are members of Mgahinga Forest National Park. The two are dominant silverbacks helping their father Bugingo protecting the entire group. There is no doubt, Mark and Mafia are typical sons of Bugingo and one of them is expected to dominate the group after the death of their aging father. Like human beings, the young and female gorillas in the Nyakagezi group pay respect to Mark and Mafia- the future leaders. The two are powerful and in the case of visitors, they keep a keen eye to ensure the safety of the entire group.

RUKUNDO GORILLA
Is a member of the Nyakagezi gorilla group, when it was still in blackback stage it was so dramatic to visitors and could always give the first insight to the trekkers making it so famous and well known to game rangers and visitors who trekked the group. That is why on September 30th, 2013, Rukondo fell sick after being ensnared in the forest and was identified by the trekkers who had gone to visit the group. Trackers reported that the young silverback Rukundo was observed with a bad cough and showing signs of weakness. He had not moved out of his night nest until late in the afternoon. He has not observed feeding with his group members, however, the group stayed within 50 meters distance of Rukundo’s nest. The rangers received the information and passed it on to the gorilla doctors: Fred and Jean who intervened to treat Rukundo.